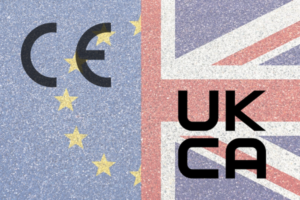 After Brexit, the EU’s main product standard will be replaced by a brand new UK equivalent: the UKCA mark.

This week we look at why, how and when the UK will replace the CE mark.

We’ll also explain some of the steps that Irish manufacturers and distributors need to take now to get ready for UKCA.

What is the CE mark?

The CE symbol is a quality mark found on most of the products sold inside the European Economic Area (EEA). Almost every ‘manufactured item’ sold in the EEA (everything from kid’s toys to advanced medical implants) carries the CE symbol – the CE stands for “Conformité Européenne”, or European Conformity.

Whenever you see the CE logo, you’re effectively looking at a promise from the manufacturer. By stamping their product with the CE logo, the manufacturer is taking full responsibility for the legal compliance of the product you hold in your hand and declaring that it meets the EU’s minimum health, safety and environmental standards.

Some products need to undergo rigorous third party testing to earn their CE stamp, whereas others simply require the manufacturer to complete a self-assessment form — it all depends on the risk profile of the product being sold. You can find out more about CE product classes, and other regulatory requirements, on the EU’s official guide to selling products in the EU.

Will the UK still use the CE mark after Brexit?

In the short term, CE will probably remain the default standard for products sold in the UK. The CE mark is an effective and well-understood product standard which has been written into UK law for many years, so there’s no need for the UK to abandon it immediately on Brexit Day. By leaving the EU, the UK surrender their right to influence any future changes to the CE system, so a switchover from CE to UKCA (UK Conformity Assessed) on products sold in the UK is inevitable at some point in the future.

No formal timelines have been declared yet, but the UK Government have promised businesses that there will be a consultation period, then a notice period, before CE is phased out completely. We estimate that the transition from CE to UKCA will take place in the second half of 2021 or later, but it could happen at the end of 2020 – it all depends on Brexit negotiations over the next few months. We’re advising any manufacturers who sell into both the EU and UK to at least get ready to add both quality marks to your goods by the end of the year.

It’s worth noting that chemicals, pharmaceuticals, cosmetics and foodstuffs don’t carry a CE mark and probably won’t need a UKCA mark in future — these types of goods are covered by separate labelling requirements.

Are UKCA rules the same as CE rules?

To begin with, we expect CE standards and UKCA standards to be almost identical. Manufacturers who have already gone through the CE process shouldn’t face too much difficulty. Further down the supply chain, Brexit will have a big impact on businesses selling CE-stamped goods.

Because of the unique way that Brexit ‘re-draws the borders’ of Europe, many businesses that were previously classed as distributors under the CE system will suddenly become importers …and that will completely change their legal responsibilities…

When Brexit happens, a lot of businesses previously classed as ‘distributors’ may suddenly find that they have become ‘importers’ in the eyes of the authorities, which completely changes their legal responsibilities. The UK Government’s website has a small amount of information on this (check whether your legal responsibilities are changing) but there are a lot of questions that still need to be answered; as the situation evolves, Irish businesses classed as distributors under the CE system may need to take legal advice.

What should I do to get ready for UKCA?

We expect the UKCA system to be a close replica of the CE system for the first few years – we also expect the CE mark to remain valid in the UK for the foreseeable future. The first step is to double-check that you have a full understanding of the CE marking system. If you are already selling CE-marked goods in the UK, we recommend you sign up for email alerts on the gov.uk website so that you hear about any developments as-and-when they happen.

Stay up to date with the latest Brexit developments on the Baku Brexit Hub.