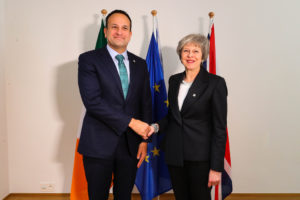 It’s been a very busy few weeks for Theresa May. Forced to cancel a trip to Ireland at the last minute to face down a leadership battle within her own party, more recently she’s been battling calls of no confidence from the UK’s opposition benches. Mrs May is still standing, but the political infighting hasn’t brought us any closer to knowing precisely what will happen on Brexit Day.

With less than 100 days to go until 29th March 2019, and with the UK Government postponing their vote on the Withdrawal and Implementation Bill until the 21st January, a No Deal Brexit is looking increasingly likely.

The Two Flavours of No Deal

There seem to be two types of ‘No Deal’ on the table at the moment, namely ‘Managed No Deal’, which is being pushed by long-standing Brexiteers, and ‘No Deal, with Guidance’, which is the most likely outcome at the moment.

A Managed No Deal, or a Negotiated No Deal, is being promoted by pro-Brexit MPs like Andrea Leadsom. The suggestion is that, on 29th March 2019, the UK can immediately default to WTO standards and can start negotiating free-trade deals as a third country, which would eventually lead to a better outcome than a straightforward ‘No Deal’.

A Managed No Deal is misnamed in our opinion. It’s based on the UK leaving the EU with nothing agreed on 29th March 2019, which would cause chaos at ports across Europe. There’s an assumption that WTO rules can be implemented and followed instantly with no time for staff training or systems management. In addition, there’s no clear consensus from pro-Brexit MPs about what a Managed No Deal would actually look like. At the moment, we’re treating this as a parliamentary response to Theresa May’s Withdrawal & Implementation Bill, rather than a viable option for Brexit.

No Deal, with Guidance

In the past few days, a number of UK Government departments have started issuing guidance on the import and export of specific goods. We’re happy to see that the UK Government is starting to at least try to offer some clarity on what trade will look like in just over 3 months’ time.

Based on what we’ve seen, it looks like the UK Government is preparing for a no-deal Brexit, and that the UK will recognise and respect EU standards  in the months immediately following Brexit. It also looks like, wherever possible, travel between the UK and Ireland will remain the same after the UK leaves the EU. This isn’t the same as saying it’ll be ‘business as usual’ of course;  businesses will be required to apply due diligence on any goods they import or export. In short, it will be up to all of us in the business community to prove that our goods meet legal standards in both the EU and the UK. That might be as simple as ticking an extra box on a form, or it could mean hiring a vet to inspect & sign off on every live animal before it boards the ferry. We need clarity, not just guidance, on all of this.

Some examples of the UK Government’s ‘no deal’ guidance papers:

Plan B, a Second Referendum and Other Alternatives

There are a number of other possibilities being mentioned in the news, such as Plan B, a Second Referendum and a new agreement altogether, but given the time remaining and the confusion and division within the UK Government, we don’t see any of these possibilities coming into force.

Guidance Papers: better than nothing, but we need more of them

The two “No-Deal Brexit” guidance documents we’d really like to see a fresh copy of are the UK’s guidance on commercial road haulage, and the UK’s Trade Tariff Advice. These documents haven’t been updated since September and August respectively (a lifetime in terms of the Brexit debate), and they’re unlikely to get updated further until after the UK’s parliament sit down to vote on the Withdrawal and Implementation Bill in January 2019.

A bit of Good News: The Trade Remedies Authority

The UK have also started to set up the Trade Remedies Authority, which we see as a massive step forward for importers and exporters. With the newly-formed TRA (due to open before Brexit), the UK Government will create a regulatory body that can replace the EU Commission. The TRA will start off by matching existing EU import/export measures, and adjust those measures as necessary over the months that follow Brexit. It’s a relief to see that the UK at least have an accountable legal framework for those of us selling into, and buying from, the UK next year.

Deal or No Deal, Baku are prepared.

From our perspective here at Baku, we’ve spent a lot of time getting ready for every realistic Brexit scenario over the past few months. As we prepare for a few hard-earned days off over Christmas, we’re confident that our systems are now strong enough to face whatever 2019 might bring. We’ll keep watching the latest developments in the news, we’ll keep attending the latest industry briefings and we’ll read every guidance paper and publication we can to keep our clients informed in the weeks and months to come.

In the meantime, from all of us here at Baku, we wish you all a very Merry Christmas and a Happy New Year.