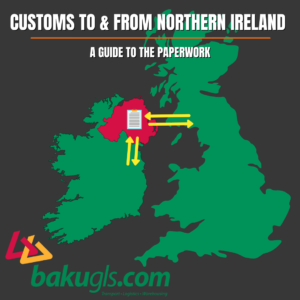 Moving goods on a business-to-business basis through the North?

There are certain steps that you should take to comply with EU and UK customs laws.

In this article, we’ll explain the basic due diligence you’ll need to carry out when moving goods from the UK to the EU via Northern Ireland.

We’ll explain the paperwork you’ll probably have to complete, and we’ll list some of the exemptions you might qualify for under the Northern Ireland Protocol.

We’ll also show which rules are likely to change (and when), so that you can prepare for 2022 and beyond.

Brexit Has Changed How Goods Move In & Out Of Northern Ireland

Now that Brexit has happened, all EU/UK imports and exports should now go through customs. Northern Ireland’s border is the only land border between the EU and the UK, but long-standing safeguards like the Good Friday Agreement protect against a hard border of any kind on the island of Ireland.

Neither the EU nor the UK want Northern Ireland to become a ‘customs back door’, where goods that should be taxed or controlled can sneak in unannounced. Authorities on both sides of the border have had to invent innovative new customs arrangements that keep Ireland’s borders completely open, whilst at the same time control goods crossing the border. If this sounds complicated, that’s because it is. The NI border was one of the biggest hurdles that UK and EU Brexit negotiators faced in the four-year lead-up to Brexit.

Thanks to the Common Travel Area, we are all — as individual citizens — still guaranteed the right to travel, live and work in each other’s country. The same freedoms don’t quite apply to businesses, however. Almost all traders selling goods on a business-to-business basis will now have a customs compliance responsibility under the Northern Ireland Protocol.

What The Northern Ireland Protocol Says

The Northern Ireland Protocol (full text here) is a temporary agreement between the UK and EU, meant to keep goods moving smoothly through Northern Ireland in the years immediately following Brexit.

The Northern Ireland Protocol document is full of easy-to-understand politically-expedient headline promises, but as always, the devil is in the details. When we read through the fine print, we see that many of the checks and systems needed at any other EU-UK border point do still exist, just in another form. For instance, the protocol promises …

The Northern Ireland Assembly will vote to keep or cancel the Northern Ireland Protocol in 2025, so these rules aren’t set in stone. Not all of the customs procedures have been implemented yet, either — some safety & security declarations won’t become mandatory until 2022.

There’s a good explainer on the Revenue website if you need more detailed information.

How To Prepare Your Business For NI Customs Compliance:

So where does all this leave us when we need to move goods to or through Northern Ireland? As a starting point, we recommend that all of our customers take the steps we’ve listed out below:

Register with the Trader Support Service

When most of us think of controlled goods, we think of dangerous weapons, uncut diamonds and other rare items. In practice, a controlled good could be anything from an agri good (fish, fruit or vegetables, for instance), to tobacco or alcohol (both subject to excise duty) or certain chemicals (hazardous substances and HFCs, for instance).

If you are trying to ship something that is listed as a ‘Controlled Good’, then you will need to present your shipment for inspection at the border, and you will need to carry additional paperwork. If you’re not sure whether your goods might be classed as a Controlled Good, you can check it yourself using the Northern Ireland Online Tariff tool or give us a call on + 353 53 9161786. We’ll be happy to help.

Check which Declarations you should make

The UK Government have published a huge amount of technical information relating specifically to post-Brexit Northern Ireland customs (see the full guidance here). There are plenty of exceptions, exemptions and subsidies depending on the specifics of your cargo and your final destination, but for most of our customers, the main declarations to prepare for are ENS and ‘Goods Not At Risk’.

If you’re moving goods from Great Britain to Northern Ireland, you will probably need an ENS form within the next 12 months. ENS declarations are made by the haulier (carrier) of the goods, but the declaration is based on information supplied by their customer.

The ENS (Entry Summary Declaration) was created for situations where an item has to enter the EU without full customs documents. For instance, at Baku GLS we can’t submit a normal customs declaration when we bring an empty trailer into the EU (we have nothing to declare on a customs form, because there’s no cargo on board). The EU border authority still need proof that the empty trailer is safe and secure, however, and that’s where an ENS comes in. It’s a sort of ‘pre-customs declaration’ document that can carry lots of specific information about items coming in and out of the country.

ENS declarations will eventually be needed for most shipments coming into Northern Ireland from Great Britain, but authorities are rolling the system out very slowly. Most ENS Declaration requirements have been waived until either 30 September or 31 December 2021 (see the Gov.uk website).

Goods Not At Risk Declaration

You might be able to submit a Goods Not At Risk declaration if goods are going to the EU, if the tariff code of your shipment incurs 0% duty (in other words, they’re not entering the EU on preferential customs terms). If you’re based in Northern Ireland you can learn more about this by signing up to the UK Trader Scheme. For anyone outside NI, then the Trader Support Service is probably the best place to start.

As it stands today, businesses based in the Republic of Ireland can treat Northern Ireland as an EU member state for VAT purposes. There’s more information on the Revenue website.

VAT becomes more complicated when you’re moving goods from Great Britain to the Republic of Ireland through Northern Ireland. The UK Government website has published some very specific information on VAT and Northern Ireland (see here).

VAT and Excise Duty are both quite technical areas — the rules change depending on what you’re buying or selling and where you’re based — so we strongly recommend you speak to your accountant if you have any specific questions.

Apply for an EORI Number

If you haven’t already done so, then you should apply for an EORI number. The EORI is a vital reference number that covers any trade with entities outside the EU. Any business in the Republic of Ireland can apply for an EORI. Great Britain EORI numbers are no longer accepted on the EORI system, but Northern Ireland numbers (which start with ‘XI’) are still being issued and accepted by EU customs systems.

Look out for exemptions

This guide ignores all sorts of special exemptions that may apply to your goods. Special Customs Procedures, Onward Supply Procedures and Partial Exemptions are all perfectly legitimate ways to simplify and reduce your customs burden. If you think that there are certain schemes which may apply to your business, let us know and we’ll investigate this for you.

Above all, keep a paper trail.

Even though it has been nearly 6 months since these new trading processes began, our industry is still learning how to interpret the Northern Ireland Protocol correctly. Revenue will eventually start auditing Irish businesses to check that they’re implementing the new customs rules correctly, so we all need to be ready for an audit at a moment’s notice.

You should already be keeping commercial invoices, bills of lading, EORI numbers etc. on file. We recommend that you now record every packing slip, delivery acknowledgement and shipping note, too. Try to make sure that every stage of your cargo’s journey is thoroughly documented and accounted for.

Don’t be afraid to speak up if you’re unclear about something, either. The NI Protocol is a new, complicated and temporary customs situation. The whole industry is learning as we go. You can check the Revenue.ie website or the NI Business website, or you can give us a call.